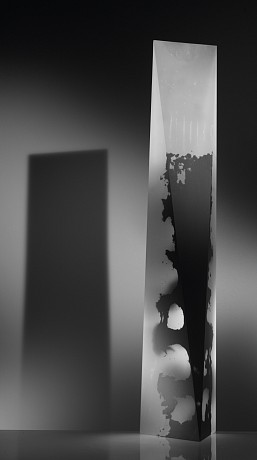 Since the 1970s, glass art, as a discipline, has developed by leaps and bounds in European countries and the United States. In 1998, Mr. Zhuang was sent by Shanghai University to study for a master’s degree at the Department of Glass Art in the School of Arts & Design of Wolverhampton University. In November 2000, he returned to China. Under technical support from Wolverhampton University, he established a glass studio, engaged in independent instruction in glass art at the Fine Arts Academy of Shanghai University. Due to honor, responsibility, creativity and diligence in his teaching career, his students are playing an important role in more than ten universities across China.

His studio has won global prestige for its achievements, as evidenced by an article in Time magazine. In addition, his exhibitions of glass art in Hong Kong, Osaka, Munich, London, Sunderland and New York have similarly attracted attention and comments from local leading media.
His works are included in the permanent collections of prestigious institutions and in exhibitions within some of the world’s best venues.
His academic literary achievement, Casting the Lyrical: Research on Methodologies for Creating Glass Art was hailed as one of the most critical works in the realm of glass art in China. Enlightening and thought-provoking, the book exudes a sharp sense of time, integrated with a fertile poetic imagination.
He was the Founding Director of the Shanghai Museum of Glass, the first contemporary glass museum in China. He served in the museum from April of 2008 until April of 2012.

In 2011, University of Wolverhampton awarded Zhuang Xiao Wei the title of Honorary Professor.
Professor Zhuang Xiao Wei's important contribution is to bring new concepts into Chinese art glass, thus changing its status in modern history. With an incredible charm and noble idealism, his work has won a highly respectable international reputation.
He has the profound understanding of contemporary art education, international cultural exchanges, and the cutting-edge technology of related disciplines, and has achieved a very developed advanced program. He organized and promoted the art of glass, and made varying degrees of progress in higher art education, socio-cultural and industrial areas in China. His guidance is respectfully scientific, very detailed and effective. This incentive for him has obtained results that have merged with his idealism in glass.