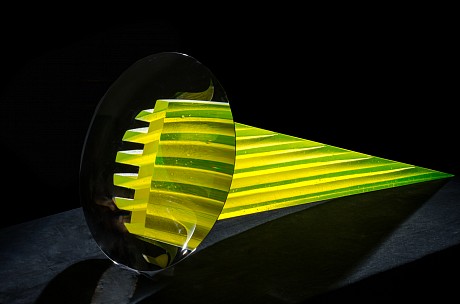 Štěpán Pala was one of the most outstanding students of the department of architectural glass lead by Vaclav Cigler at Bratislava art academy. Born in Zlin, Czechoslovakia, in 1944, Pala trained as a glassmaker, at the glass school in Kamenický Šenov, and worked for a while in the Czech glass industry. In 1969 he started attending the academy in Bratislava, where he set up as an independent artist after completing his studies in 1975. The recipient of many official commissions in Czechoslovakia, he began to take on work abroad after the collapse of Communism. He has won several prizes and now enjoys a major reputation in the world of glass.

At first sight Pala's work closely resembles that of his teacher. Both men emphasize glass's capacity to reflect light and to bring about special spatial effects, and both men have suffered the fate of having their creations perceived exclusively in these terms. Pala's art also possesses a philosophical dimension: he uses optical and mould-melted glass to produce geometrical sculptures that make visible certain universal laws. He also records his ideas in independent drawings, in which triangular and rectangular shapes develop naturally from one another and form rhythmical sequences recalling successions of notes in music. The drawings suggest pierced bodies constructed from wire or wood, as though the lines had suddenly burst into three dimensions. A similar process can be observed in Pala's glass works, which seem to embody a transformation of his drawings into geometrical volumes, their cut surfaces generating countless reflections. The artist also seeks to include movement in his sculptures. Hence some of them spiral upwards, while others consist of two round sheets of glass, held together in the middle by a kind of hinge that would start rolling if pushed.

Pala's work is featured in worldwide public collections including Victoria and Albert Museum in London, England; Queen Beatrix Collection in The Netherlands; Museum of Glass in Bärnbach, Austria and the Slovak National Gallery in Bratislava. Pala is the recipient of numerous honors, including the Gold Prize at the 1998 International Exhibition of Glass in Kanazawa, Japan; First Prize at the 1994 Slovakian Fine Bowls Competition in Bratislava and the Grand Prize at the Internationale Glaskunst Triennale in Nuremberg, Germany.