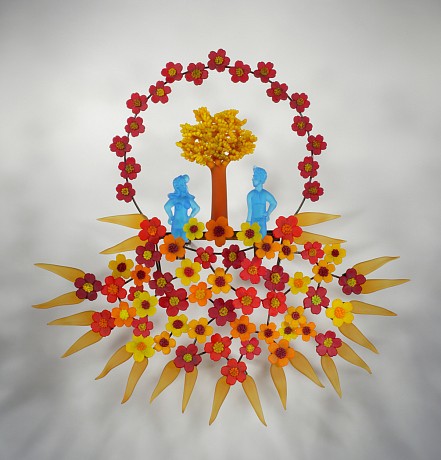 Richard Jolley was born in Wichita, Kansas in 1952, but has lived almost his entire life in Tennessee. His studio for the last thirty years has been in Knoxville where in 2004 the Knoxville Museum of Art staged a major retrospective exhibition of his work. His studio is in what was once a set of garages with a little house attached where he works with a team of two or three others. His kind of hot glass sculpting is heavy work that cannot be done alone. Like so many others of his generation he discovered glass when in his second year at university and it has been his main chosen material ever since.

He is a figurative artist and as so often happens with figurative artists there is an element of doodle-like automatic drawing about the faces and bodies he creates, the patrician nose, the long jaw and the cleft chin of the male, the well-rounded female forms. However varied their facial expressions or their body language they remain the same two people. Their physiognomy bears a striking resemblance to Richard himself and his wife Tommie Rush, also a glass artist. They are the spokespeople for everything that Richard Jolley wants to express. Everything he has learnt has been knowledge gained through trial and error to the point where he is now totally in command of the glass techniques he has devised, a master of hot-formed glass. He is an avid reader and has a wide appreciation of the arts. The main themes in his work revolve around the American way of life. Never shying away from technical challenge he works in a wide range of media, has gone from vessel to sculpture, from glass to bronze, from woodcut and monoprint to combinations of pigment, silver leaf and varnish on heavy paper and has been justly described as a "virtuoso of various techniques". In 2005 his many talents combined to create the costumes and scenery for Mozart's Magic Flute for a production in his hometown of Knoxville, Tennessee. The human figure is always at the heart of his creations, either on its own or accompanied by birds, dogs, flowers or leaves. Faces, bodies, and accompanying paraphernalia always address some human issue. Titles such as Four Seasons, Affinity and Remembering the Night are invariably clear indications as to what these are. The titles are the key to the artist's thought processes from the outset of creation to completion. Since The Magic Flute his work has made a leap in scale, a leap from sonnet to epic poem, as it were. Perhaps his involvement in the world of theater and opera has made him think in more scenic terms.

Jolley's work is included in many prominent public collections throughout the world including Corning Museum of Glass in Corning, New York, the Glasmuseet Ebeltoft in Ebeltoft, Denmark, Los Angeles County Museum of Art in Los Angeles, California, Museum of Fine Arts in Boston, Massachusetts and Smithsonian American Art Museum and the Renwick Gallery in Washington, D.C.  His monumental Cycle of Lifeinstallation is permanently installed in the Knoxville Museum of Art.