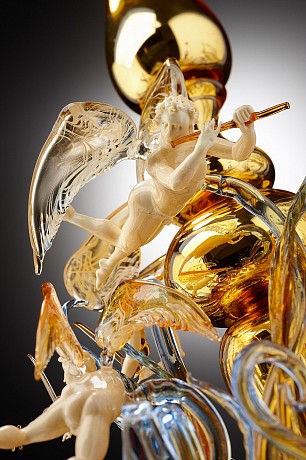 Lucio Bubacco was born on the beautiful island of Murano, near Venice, in April 1957. Commonly referred to as the Glass Island, Murano provided Lucio with the inspiration and techniques that have set him above and beyond his common contemporaries. He has given life to an art form uniquely his own using the traditional Venetian lampworking technique in which a blowtorch heats canes of glass. Lucio Bubacco is one of only a select minority who use the lampworking technique for true artistic expression. His incomparable work is proudly displayed in significant private and public collections throughout the world. Litvak Gallery is proud to handle the timeless works of such an unsurpassed virtuoso.

Lucio's immersion into glass art began when he was just a boy. Working beside an old craftsman, Bubacco began playing with glass and making small animal figures, beads, and tablets. When he was merely fifteen, he received his artisan's license and began promoting Venetian lampworking souvenirs. In 1980, he studied anatomical drawing with Venetian artist Alessandro Rossi. Lucio's steadfast fascination of human anatomy led him to experiment and explore ways of artistic expression that surpassed the technical limits of his craft. Whereas glass blowing is aesthetically pleasing simply due to the natural properties and form of heated glass, despite lacking any real definition, Bubacco has found a way to marry these two notions, to bring detail and form together, in the pursuit of artistic expression.

Bubacco's ability to breathe life into glass, puts him in high demand; anyone who's seen one of his pieces understands why immediately. His large, free-standing sculptures are worked hot and annealed during the process. This method of manipulating glass is completely unique in lampworking. Furthermore, Lucio's pieces are made from flexible, but fragile Murano soda glass canes instead of less-breakable Pyrex. Although his process makes the task of creating such beautiful art more difficult, the results speak for themselves. Never has glass art radiated so lifelike and magnificent.

Today Lucio Bubacco is considered a master of his craft. His technical knowledge and experience, combined with his natural aptitude for glass handling and artistry, have helped him transcend the limited confines of the "lume" process and catapulted him into a world-class artist. Lucio's work has been proudly displayed in over forty exhibitions, from Florida to Tokyo, in the last nineteen years. He has won several awards, including the famed Kristallnacht International Glass Competition in Philadelphia. He has been written about in various publications, always highlighting his outstanding achievements and unique sensibilities